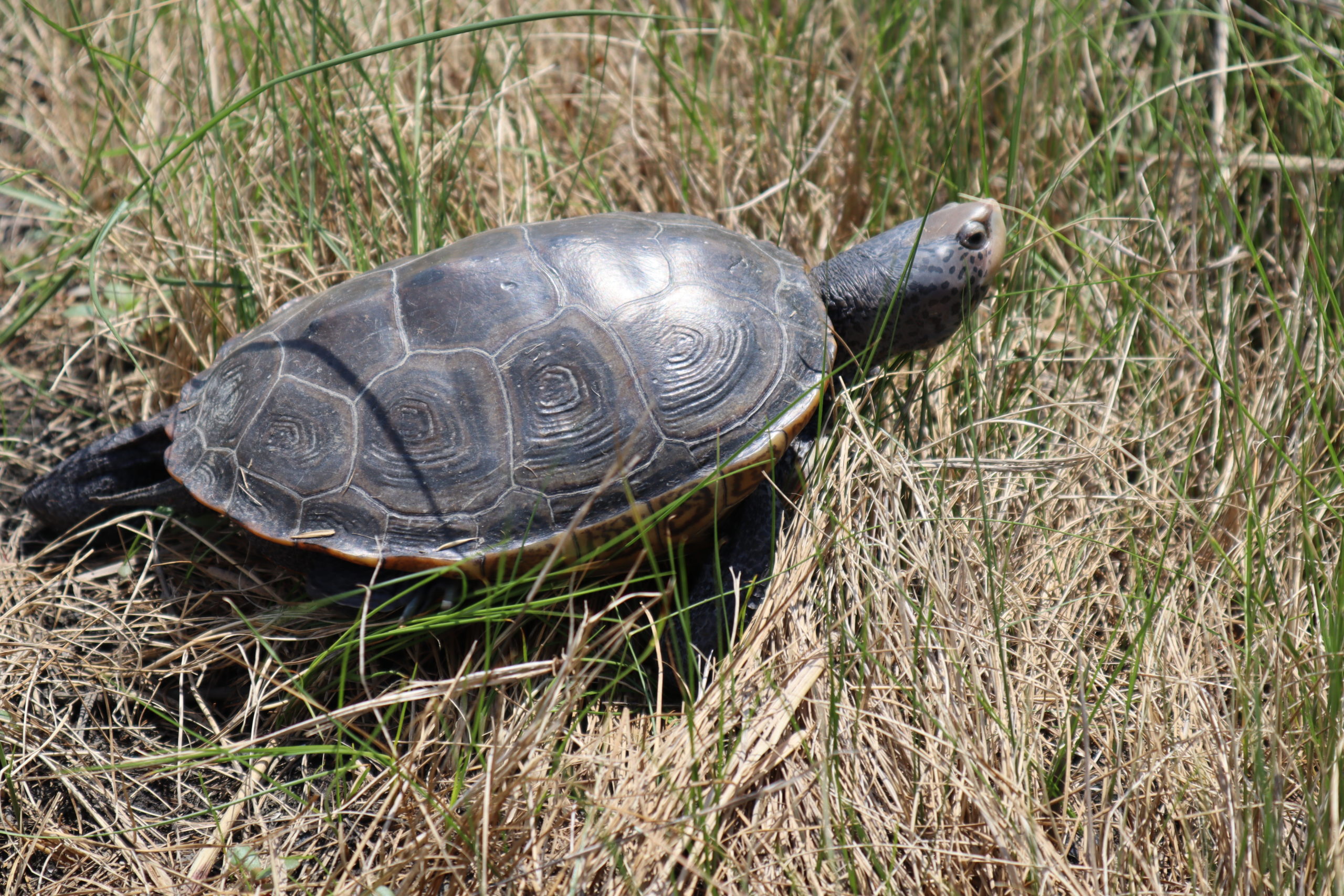 The Diamondback Terrapin or just terrapin is a species of turtle that is indigenous to brackish costal marshes in southern and eastern United Sates. They got their name because of the pattern on the top of its shell. The color of their shell can range from grey to brown and the pattern can vary, while their bodies’ colors can be white, yellow, brown, or grey. All have their own pattern of black wiggly markings or spots on their body and head. The females are larger in size than the males and can reach a size as large as 9 inches. Maturity for females depends on size. Terrapins are strong swimmers. Their hind feet are strongly webbed unlike sea turtles that have flippers. They have strong jaws and can crush clams and snails. The females have larger more muscular jaws. Other items they consume are crabs, shrimp, barnacles, fish, and mussels. They can tell the difference of the saltiness in waters and when needed they will raise their heads with their mouths open to catch rainwater drops or drink the freshwater layer that can accumulate on top of salt water during a rain fall. In captivity they can tolerate fresh water but prefer an intermediate saltiness. The terrapin is the only turtle that lives in the brackish waters of tidal creeks, salt marshes and where the tide meets the stream.

The life cycle of a terrapin is males meet maturity around two to three years and females can be as much as ten years. They mate in early spring. Their eggs are in clutches which can rage from four to twenty-two eggs. A female can lay up to three clutches a year. The eggs hatch in late summer, early fall. A female can store sperm from different males for years. Females travel inland to sand dunes or areas with high vegetation to lay their eggs. Once the nest is covered, the female returns to the water and never returns to the nest. Eggs hatch in sixty to eighty-five days. Terrapin hatchlings can tolerate freeze conditions and can stay on land during the winter. Since nesting is the only on land activity there is for terrapins, little is known. Some suggest they hibernate during the colder months in the mud of marshes and creeks. Nests, hatchlings, and sometimes adult terrapins are eaten by rats, raccoons, foxes, and birds, mainly seagulls and crows.

In the 1900’s, terrapins were considered a delicacy. They were hunted almost to extinction. The largest threat to the terrapin’s existence is humans. Whether it is land development along the coastlines, wounds from motorboats or propellers, ocean levels raising and even suffocating in crab nets or crab traps. There is a device to retrofit a crab trap so as not to capture terrapins. In 2016, New Jersey removed terrapins from their game list with no hunting season. Humans also retrieve hatchlings from nests and sell them. Harvesting has been halted in several states. They are classified as a species of “special concern”. In New Jersey it is illegal to take, give away, sell, breed, or transfer the diamondback terrapin.

Some fun facts about terrapins, In 1899, terrapins were on the dinner menu at Delmonico’s Restaurant in New York City for $2.50, today’s price would be $77.36. In 2009, JFK airport once had flight delays of an hour and a half due to 78 terrapins crossing one of the runways. It happened again in 2011, when there were 150 terrapins on the runway. Eventually, a turtle barrier was installed but it happened again when 86 terrapins made it back on the same runway in 2014. The Diamondback Terrapin is the official state reptile in Maryland. There are the Maryland Terrapins and a school newspaper named the Diamondback. Grateful Dead has a song “Terrapin Station”. Terrapin images are used on tee-shirts and other Grateful Dead memorabilia and then there is the Terrapin Beer Company which uses the terrapin as its logo.

So, when you see a terrapin crossing the street, please be careful, it is probably a nesting female or a hatchling. If you can stop and pull over and help them cross, remember to take them to the side of the street they were facing.