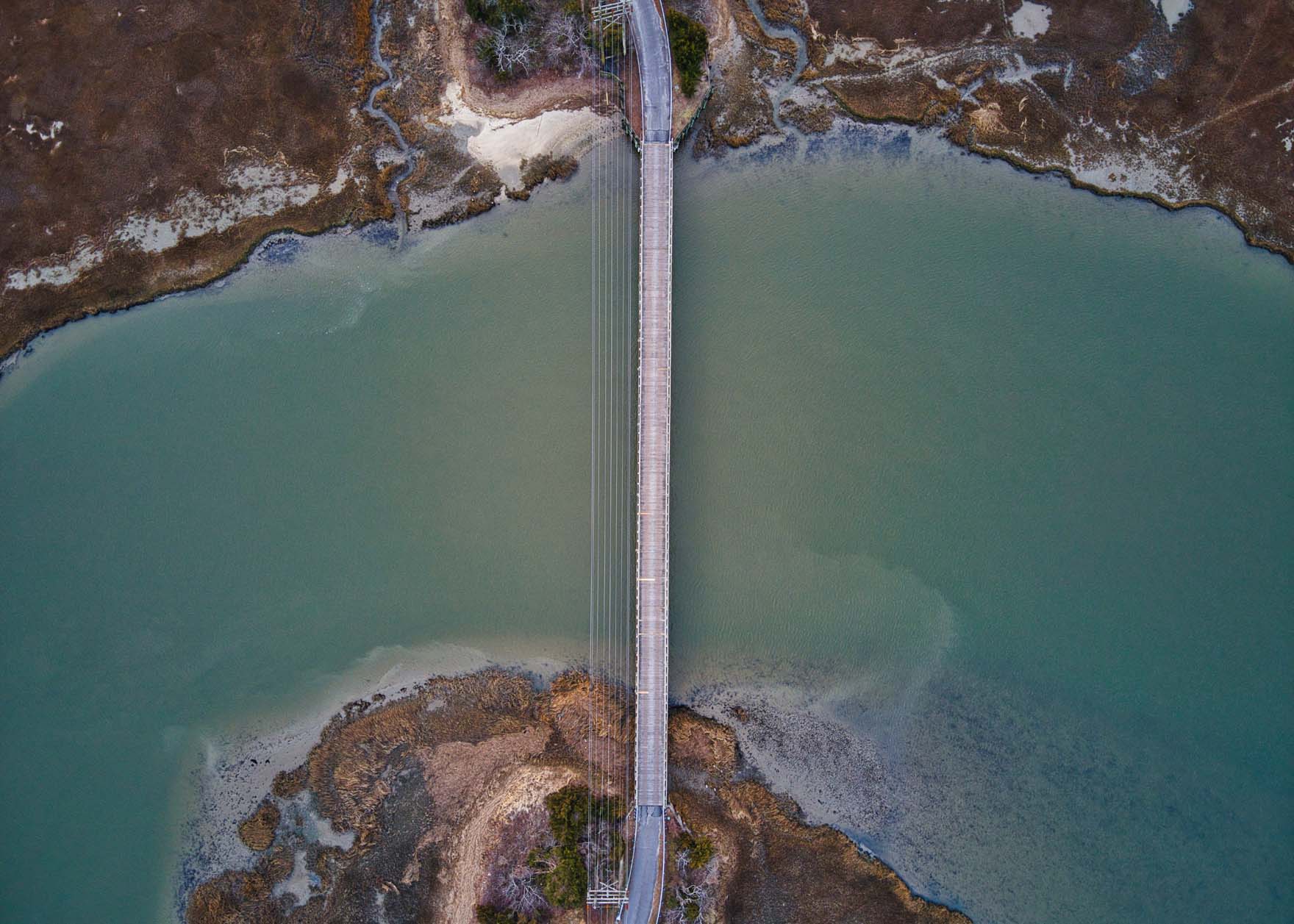 Seven Bridges Road…Or Is It?

Lying in a salt marsh within the Jacques Cousteau National Estuarine Research Reserve, is a road nicknamed “Seven Bridges Road”, but if you take the time to count, there are only five bridges. Why you may ask? Bridges six and seven were never built. It is said that in the early 1900’s, the 4-mile peninsula was to be connected to Brigantine and then from Brigantine to Atlantic City. But because of the strong churning tidal currents in Little Egg Inlet, which over the years has raised sunken islands and has been known to carve out close to the coastline channels 90 feet deep, the building of the sixth bridge would have been a futile attempt. The Rutgers University Marine Field Station, aka the Old Coast Guard Station is considered the “Last” bridge.

To get to Atlantic City today we are left with the Route 9 Bridge over the Mullica River (formerly Little Egg Harbor River). Started in 1856, but not completed until 1891 because of local politics, the original bridge was an iron framed swing bridge with a wooden deck. That bridge was replaced around 1917 with a drawbridge and which was tended to by Horatio “tater” Cramer for over 30 years until the mid 1950’s when the Garden State Parkway built a new bridge.

Even though you may not end up in Atlantic City (unless you’re a great swimmer) the five bridges on Great Bay Boulevard have a lot to offer. This pristine peninsula considered to be the most flawless coastal ecosystems on the east coast that still exists. It is home to fish, clams, mussels, a myriad of species of birds, 15 species of grasses and 36 species of herbs. From May through July, Northern Diamondback terrapins cross the road. Please keep an eye on the road during these months. Every season has its own variety of birds, peregrine falcons, great blue herons, and osprey. Throughout the seasons this is a wonderful place to bird watch. From the road, you can see the nesting platforms for ospreys. In 2014, new platforms were installed due to nesting that occurred on some sensitive equipment used by the Ejeld Station and the platforms also keep the young safe from ground predators like raccoons. The estuary is known to have the best birdwatching road in Ocean County.

You could spend almost your entire summer of weekends on these coastal wetlands, which is home to the Great Bay Wildlife Management Area on over 5,000 acres filled with winding streams that flow into the bay. All the bridges have signs posted saying, “NO Jumping, Diving, Crabbing, Fishing, Loitering” but there is a small beach, boat ramps and places where you can pull over, park on the side, and fish off the sodbanks. People say at low tide, clams and oysters are right there under your feet.

The first three bridges are two lane bridges but the fourth and fifth are single lane bridges with traffic lights. After you hold your breath traveling over the one lane wooden bridges, they dead end at a narrow path that leads to a beach area on the Little Egg Inlet. The many creeks running throughout the peninsula with access to the bay make for great kayaking. Make sure you bring a camera with you, especially during sunset. The photo opportunities here are not available anywhere else. For those with a thirst for more knowledge of the The Rutgers University Marine Field Station offers education classes and volunteer programs. In addition, the Jacques Cousteau National Estuarine Research Reserve offers their own classes, events and educational hikes and Kayak tours for adults and children.